Banitsa (Bulgarian: Баница, also transliterated as banica and banitza) is a traditional Bulgarian pastry prepared by layering a mixture of whisked eggs and pieces of cheese (sirene) between filo pastry and then baking it in an oven.

Traditionally, lucky charms are put into the pastry on certain occasions, particularly on Christmas Eve, the first day of Christmas, or New Year's Eve. These charms may be coins or small symbolic objects (e.g., a small piece of a dogwood branch with a bud, symbolizing health or longevity). More recently, people have started writing happy wishes on small pieces of paper and wrapping them in tin foil. Wishes may include happiness, health, or success throughout the new year. 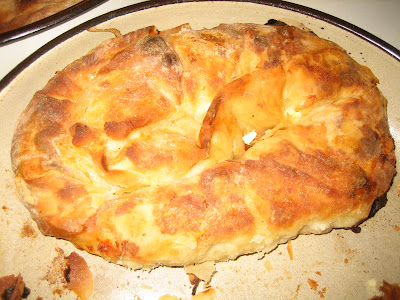 Banitsa is served for breakfast with plain yogurt, ayran, or boza. It can be eaten hot or cold. Some varieties include banitsa with spinach (spanachena banitsa) or the sweet version, banitsa with milk (mlechna banitsa) or pumpkin (tikvenik).

Traditionally, banitsa is made with homemade or commercially made pastry sheets that are prepared from a baker's hard dough including flour, eggs, and water. At home the sheets can be spread by continuously pulling the sheet of dough with one's fingers until it becomes less than a millimeter thin, or by using a rolling-pin in several stages with vegetable oil sprinkled between the partially spread leaves, or by a very difficult technique comprising waving movements of the entire sheet over the head of the cook, which resembles pizza dough making techniques.

Another sort of banitsa is called tutmanik (тутманик) and is made with leavened sheets. The usual filling is cheese.

The traditional filling is made of crushed white or feta cheese, yoghurt, and eggs. Sometimes baking soda is added to the yogurt, which makes the yogurt rise (as the baking soda reacts with the acid in yogurt). The addition of baking soda results in a fluffier filling.

Sweet fillings with apples (similar to apple pie or strudel) or pumpkin with sugar, walnuts and cinnamon exist as well. In some regions, only the walnuts, sugar, and cinnamon are used. The apple variant is called shtrudel (щрудел), and the pumpkin variant is tikvenik (тиквеник).

In a large greased baking dish, individual sheets are layered one by one with small amounts of filling and vegetable oil between them. After half of the sheets are placed in the pan, a large portion of the filling is spooned onto the leaves and is then covered with the remaining sheets and filling in the same manner. The pastry is then baked at 200-250 degrees Celsius.

An alternative method of preparation is taking each sheet of dough, laying it out flat and sprinkling some of the filling on it. Then, the sheet is rolled up into a tight roll with the filling on the inside of the roll. The long roll is then taken and rolled up in a circle. This first sheet of dough is then placed in the baking pan. The process is repeated with the remaining sheets of dough and each consecutive roll is placed around the first one in the pan. The resulting shape resembles a spiral (see photo). The banitsa is then sprinkled with vegetable oil and baked.

In Bulgaria, banitsa is a symbol of Bulgarian cuisine and traditions. Traditionally, Bulgarians prepare and serve banitza on two holidays - Christmas and New Year's Eve. On these days, people add kismets (fortunes, lucky charms) into the banitsa. The lucky charms are usually small pieces of dogwood branch, which vary in numbers of buds on them. They symbolize health and longevity. The branches are hidden inside the banitsa, and the banitsa is then baked. When ready, the banitsa is cut in a way that each piece contains a dogwood branch. A wish is associated with each branch and the different number of buds on the branch helps to recognize the corresponding wish. The wishes include happiness, health, success, travel, etc. The banitsa is then spun on the table and everyone takes the piece which is in front of them when the spinning stops. Then they find their fortune inside the piece - the fortunes predict what one is to expect from the new year. The most common fortunes are "wealth", "health", "love", "marriage", "baby", "journey", etc.

Alternatively or in addition to the kismets, some add a coin or simply little pieces of paper with written fortunes on them (just like the ones in the fortune cookies). In this case, they are wrapped in tin foil to preserve them during baking.

The word "banitsa" is used as a simile for something (mainly documents and paperwork) crumpled, or badly maintained. For example, a police officer can make a remark to someone about letting his or her passport "become like a banitsa" (станал е на баница); a teacher might say this about a pupil's notebook.

About Us - Contact Us Disclaimer: All opinions expressed here are those of their authors and not of their employer "How many of our most joyful memories have been created in front of a screen?", John Freeman, WSJ. Follow @Road7